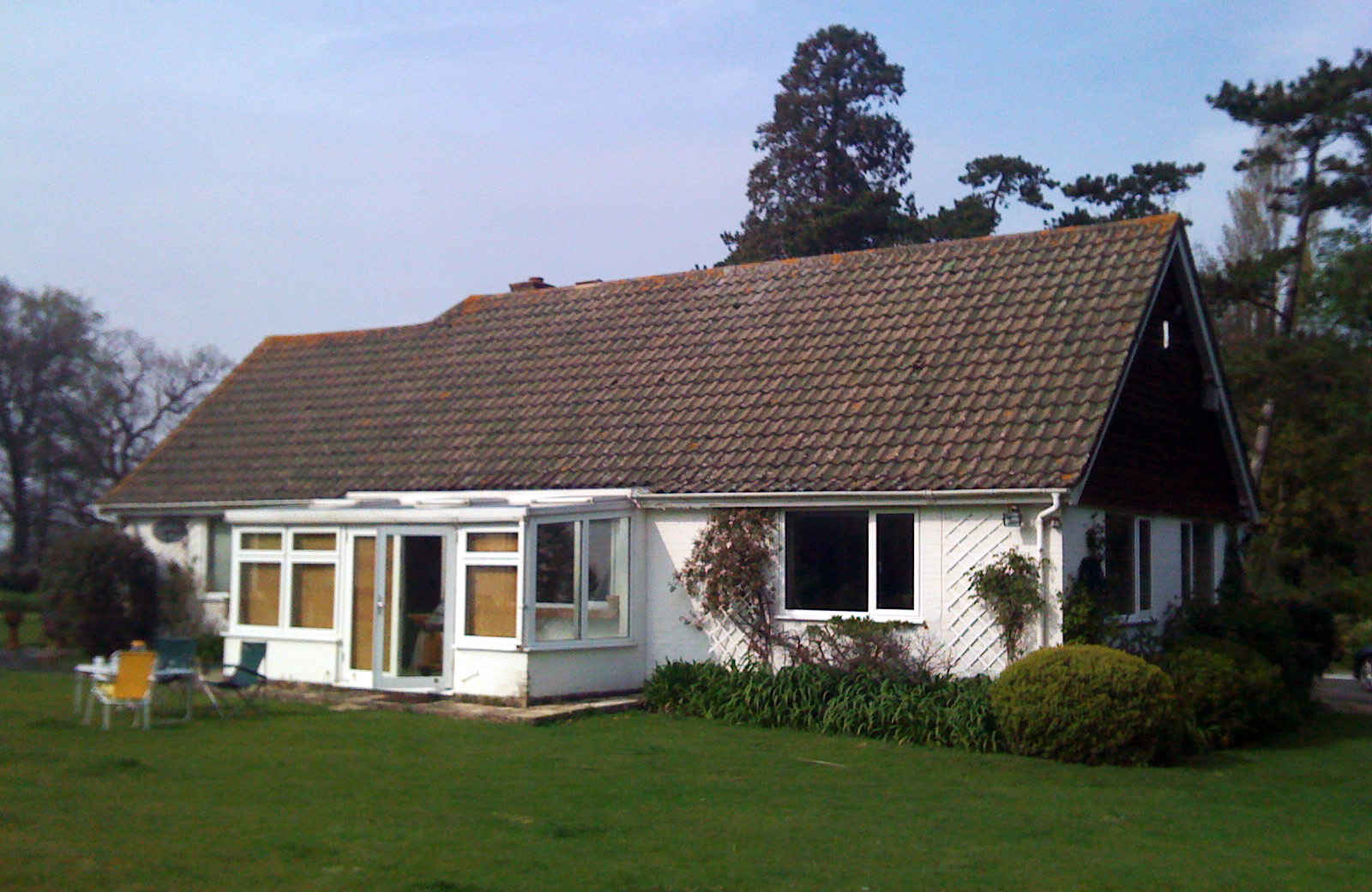 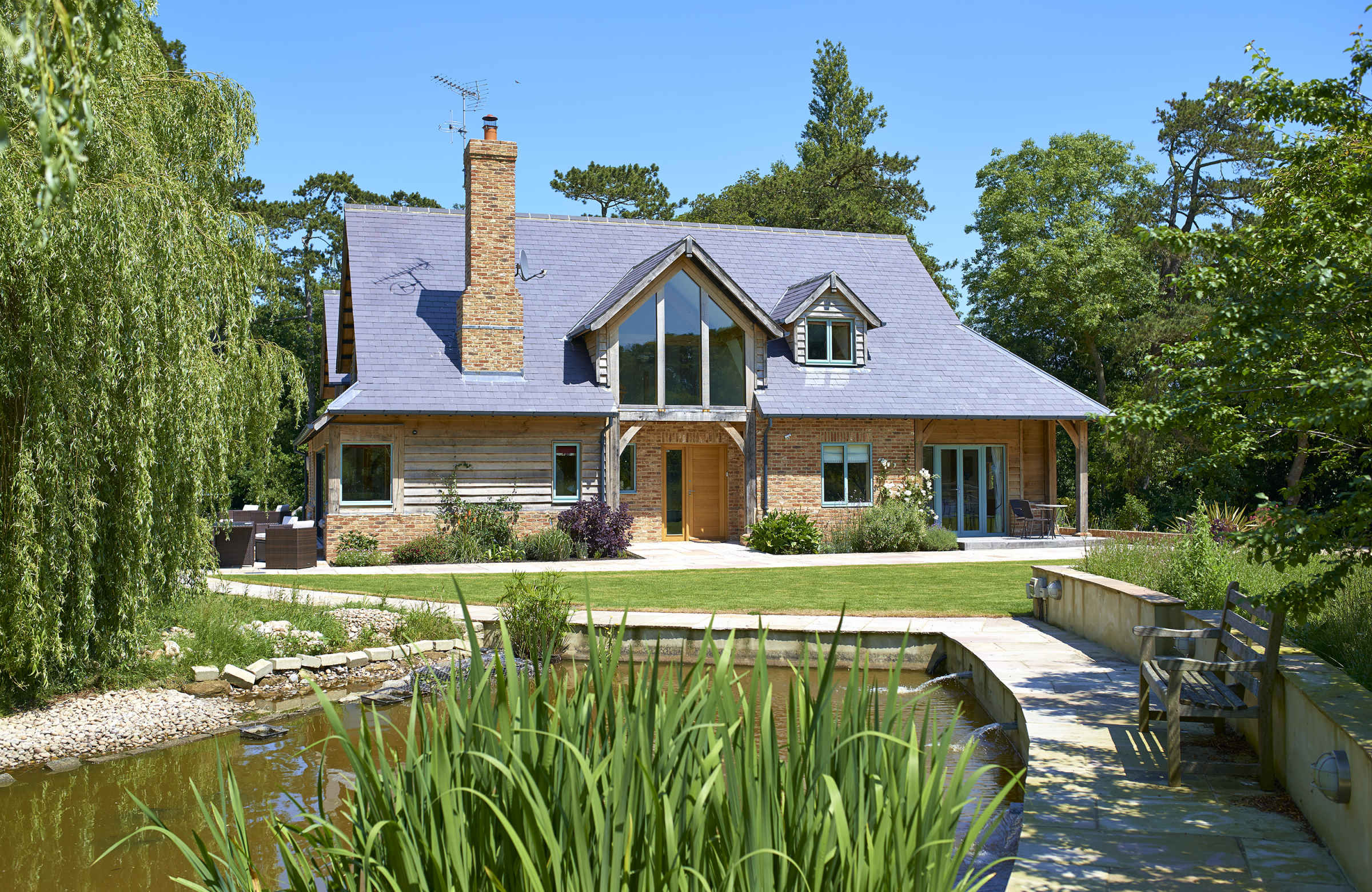 I first met Mike and Ros whilst working on the Oakwrights stand at a Home Build and Renovating Show. Although at the time they resided in Surrey, they had recently purchased a plot not far from the coastline on the Isle of Wight. Having had experience with working on projects on the island, I suggested meeting on site in order to develop their design brief and so that I could establish what would be acceptable from a planning point of view.

Having enjoyed a pleasant crossing on the ferry, I found Mike and Ros in the garden area of the existing dwelling, tackling the weeds and vines that had taken over areas of the mature garden. The existing dwelling on the site was a modest, single-storey bungalow; however, due to the generous roof space, I was confident that the size of the replacement dwelling would accommodate Mike and Ros’ requirements as the Local Planning Policy allowed for a 35% increase in volume.

The conceptual stage of the project commenced in early 2009. The internal layout incorporated 4 bedrooms, one of which was at first floor level, with an overall floor area in the region of 3500 sq ft. Due to the elevated position of the site, emphasis was given in maximizing the aspect over the surrounding open countryside and distant coastline and with this in mind; a section of the first floor layout was allocated as a lounge area with full height glazed doors leading onto a covered balcony where our clients could enjoy an alfresco dining experience. Consideration was also given to ensure that the maximum amount of natural daylight was gained throughout the house, which is typified by the galleried landing with a direct and uninterrupted view into the vaulted roofline with full height glazed sections within the gable end.

The internal layout of the house was also to be one of an open planned nature, with the kitchen flowing into the dining area and main lounge. Due to the sloping nature of the site it was decided to have a section of the house split level on the ground floor, with this particular area accommodating a home office and boot room.

Where the external treatment of our client’s new home was concerned, this was to be a combination of stock-faced brickwork, horizontal timber boarding and exposed oak framed elements with full height glazed sections, all under a plain tile roofscape.

Once the conceptual drawings had been prepared with sufficient detail, a further meeting was arranged with Mike and Ros at their home in Surrey to view my initial ideas for this exciting project. Fortunately, they were both very encouraged by the style and form that their new home would take and a few minor tweaks later, including the possibility of a natural slate covering to the roof (which is not untypical of the vernacular architecture on the island), we arranged a meeting at the Isle of Wight Council Offices with the Planning Officer Anna Priestly. This pre-application meeting was very constructive and although we had increased the overall height of the proposal by a considerable amount, due to the country contemporary styling and being able to demonstrate we were within the allowable volume increase, Anna was very enthusiastic towards the scheme; even commenting that it was the kind of residential dwelling, with its well articulated detailing, that should be more prominent on the island.

With this positive feedback my colleague, Sam Leach, and I prepared and submitted a detailed Planning Application and in May 2010 Planning Permission was granted not only for the replacement dwelling, but also a detached oak-framed outbuilding incorporating a two-bay cart lodge and workshop/implement store.

To progress the project to the next stage another colleague of mine, Greville Thomas, and I went back over to the island to discuss the preparation of the Building Regulation drawings and the discharging of the Planning Conditions associated with the Planning Approval. We could not have chosen a busier day to visit the island as it was the Monday after the Isle of Wight Music Festival; however, after working our way through the hoards of muddy festival goers leaving the island, we arrived at the site and spent the whole of that afternoon going through the design and layout room by room until we were confident that we had enough detailed information to commence with the Building Regulation drawings. These drawings were undertaken in tandem with the oak frame design which ensured that the frame was appropriately and accurately accommodated with emphasis given to ensuring that the most aesthetically pleasing structural oak elements were on display within the internal living environment.

As part of the tendering process for the general building work, Dave Duggan, a Co-Director of Oakland Vale Limited was appointed as Project Consultant and on preparation of a detailed schedule of works a local building company, which had previously undertaken a successful project with TJ Crump Oakwrights, was selected as the Main Contractor.

The oak frame was delivered to site in the summer of this year and at this present time the build is progressing nicely, on time and within budget. 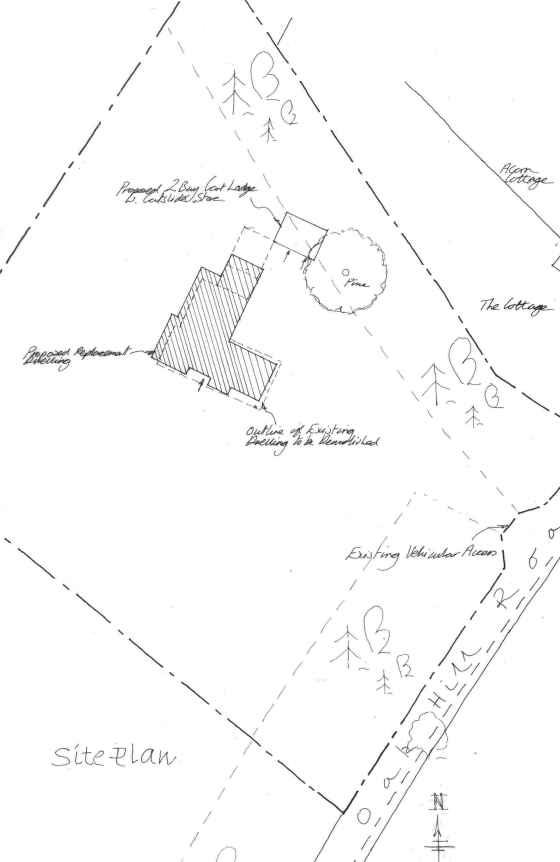 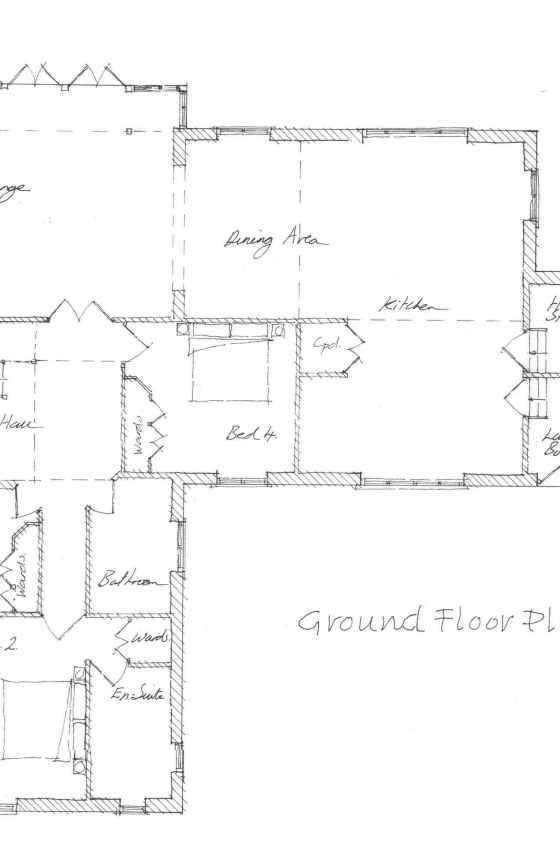 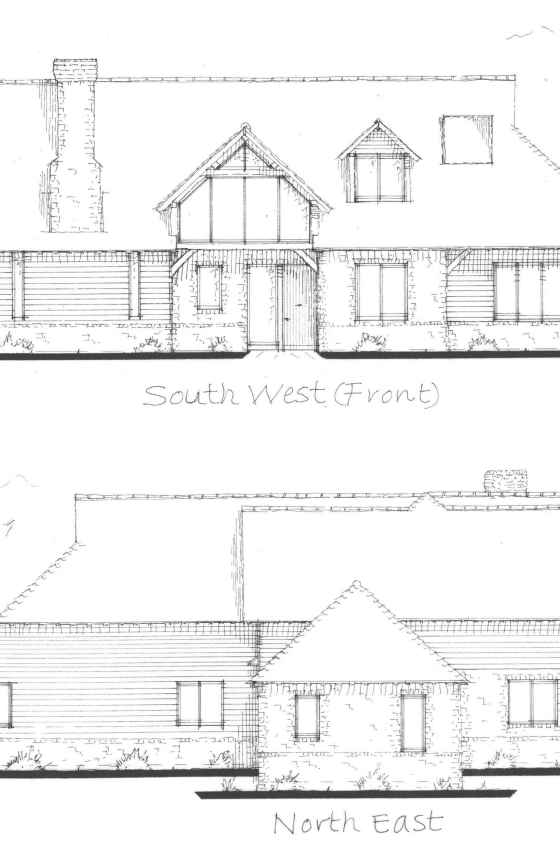